Will Jack’s fall down and break the Tesco Crown? Will Aldi or Lidl come tumbling after? As the launch hype settles down we look at the reality of Tesco’s new discount format.

A typically chilly, grey, washed out Fenland autumn morning in Chatteris, Cambridgeshire. The new Tesco Jack’s store is not hard to find. It literally jumps out of the landscape at you. A huge fat cuckoo in the tiny little town nest that is sleepy Chatteris.  It doesn’t take a hugely qualified store site planner to see it was very much the wrong shop in the wrong place, built at the wrong time. Interestingly, however, a hugely qualified store site planner DID decide it was a great place to build a dinosaur store!  How the retail landscape has changed. During the past 10 years, we’ve gone from super sheds to limited range and size hard discounters.  This Jack’s store has been literally cut in half from it’s original Tesco superstore footprint.

It’s the third week now since the big press launch and opening razzamatazz. Noticeably, the huge, oversized, superstore car park is barely a quarter full. It comprises of a bizarre mix of smaller, cheap, typically older ‘locals’ cars. These being neatly juxtaposed with a smattering of new or nearly new shiny BMW, Audi and Mercedes executive cruisers. Clearly, NAM’s, SD’s and the captains of the retail industry are still making the long lonely pilgrimage into Fenland to have a spy at the new format. And it’s a very pleasant place to shop, a big cheery, impossible to miss patriotic, Tesco red, white and blue Jacks sign greets the shopper. 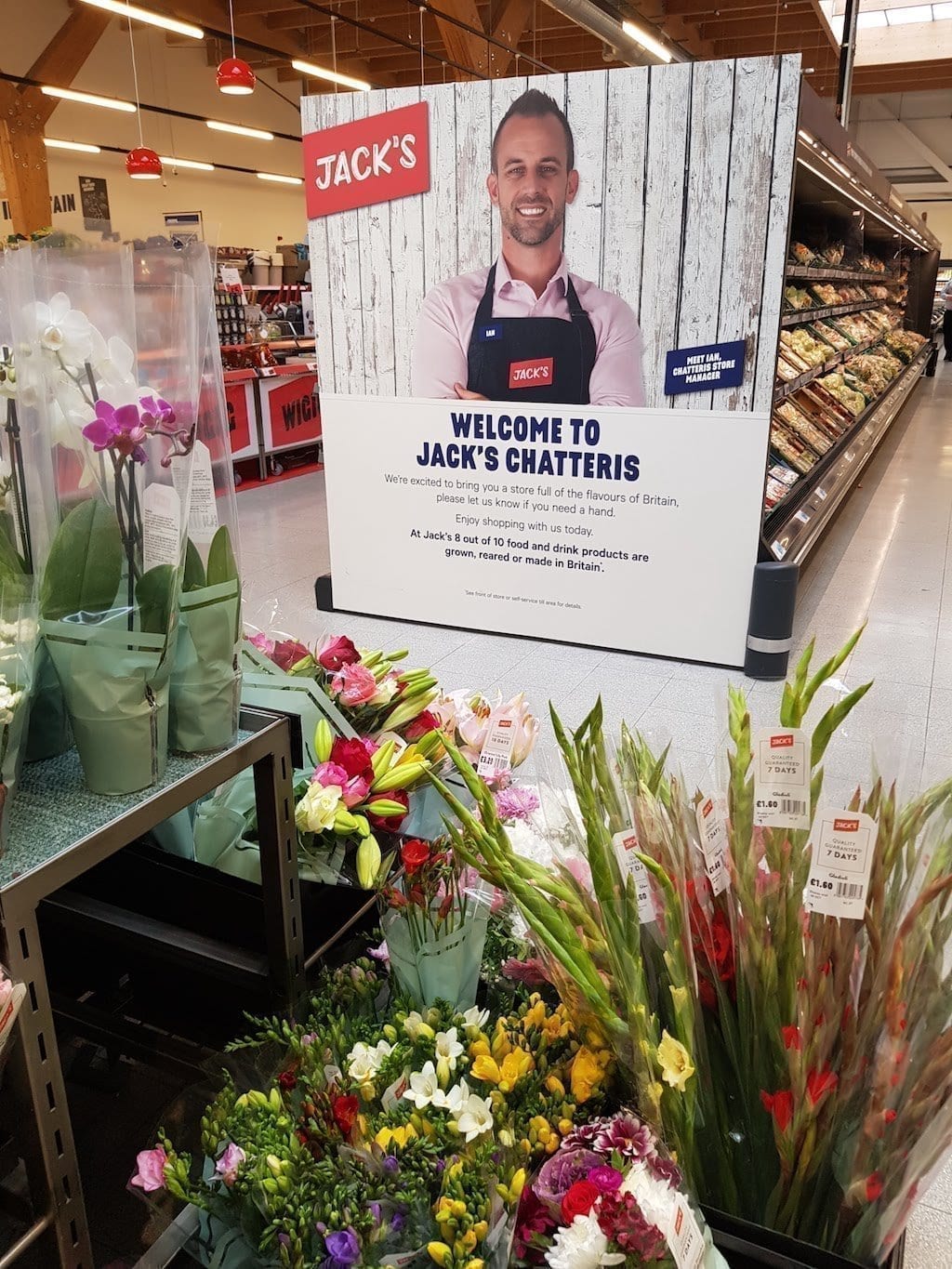 Its wide spacious aisles, designed to speed during the day replenishment, also create a sense of calm, cleanliness and efficiency. There’s a bean to cup coffee machine that vends you a fresh £1.59 cup of steaming coffee. This seems somewhat expensive and at odds with the super low Aldi and Lidl bashing prices.
A fresh bakery, a la the Lidl footprint, is first in flow. It has, what is no doubt, a deliberately undersized oven to ensure there is always a very busy employee baking off fresh smelling loaves and croissants. Produce follows, leading into Meat and Chilled Foods.  All very standardised and expected. The grocery aisles are functional, neat, and to be frank a bit soulless and boring. There were certainly very few (of the few) shoppers ‘lingering’. The Aldi style ‘WIGIG’ (When It’s Gone It’s Gone) section looks like a bit of an afterthought. It seems cobbled together and not particularly comprehensive or well thought through. Certainly not up to the Aldi/Lidl blueprint.
Quality across the store was excellent and possibly better than expected. Produce and Meat looked glisteningly fresh and bright. Clearly, the store still has it’s ‘bedding in’ over-generous waste budget targets and is getting some extra special tender loving merchandising care. However, if it can maintain these standards it’s a cracking place to shop.

Flying the Flag For Britain

‘8 out of 10 products are British’ is the strapline proclamation throughout the store.  It’s everywhere! No ‘Every Little Helps’ here. Across the store, the local sourcing and local provenance claims leap out. Even the reverse negative is used as a positive for ‘foreign food – ‘Imported by Jacks’ is the sub-branding.
Now I’m sure the great British public is all in support of good old hard working, struggling and poor British farmers and producers especially in this the very heart of Leave voting country.  However, since when did that same great British public’s loyalty stand the test of a cheaper, better Japanese or Korean car or a German washing machine or French cheese? Does ‘8 out of 10 products are British’ really constitute a credible, meaningful point of difference and competitive advantage on which to lay the foundations of the demise of Aldi and Lidl? We think not. But, perhaps that’s not the point.
The British angle is great for this part of the world and constitutes a valid marketing angle but it will not make this embryonic chain an Aldi/Lidl killer. Whatever Tesco’s plans for this small testbed chain its real strengths lie elsewhere.

As the format – ‘limited range discounter’ – suggests it caters for a base. It’s a ‘fill the cupboard and refrigerator’ shop and offers little else. But it does what it does well. This begs the 64 million dollar question – if you put a Jack’s next to a standard Tesco supermarket or superstore how much of the standard store’s trade would switch? On what we saw on our visit we’d put at tenner of our own hard earned money on a good 40% at least! Which begs an even bigger question. A £50 billion pound Tesco sized question. So what is Jack’s raison d’être, what is its purpose?
Tesco won’t, or currently can’t, answer the question. CEO Dave Lewis on opening day said he would rather cannibalise the sales from his own stores than lose them to a competitor.  But at what cost to Tesco’s stated, and as far as the City is concerned, guaranteed aspirations to build its net margins back to 3.5% – 4.0% by 2019/20? 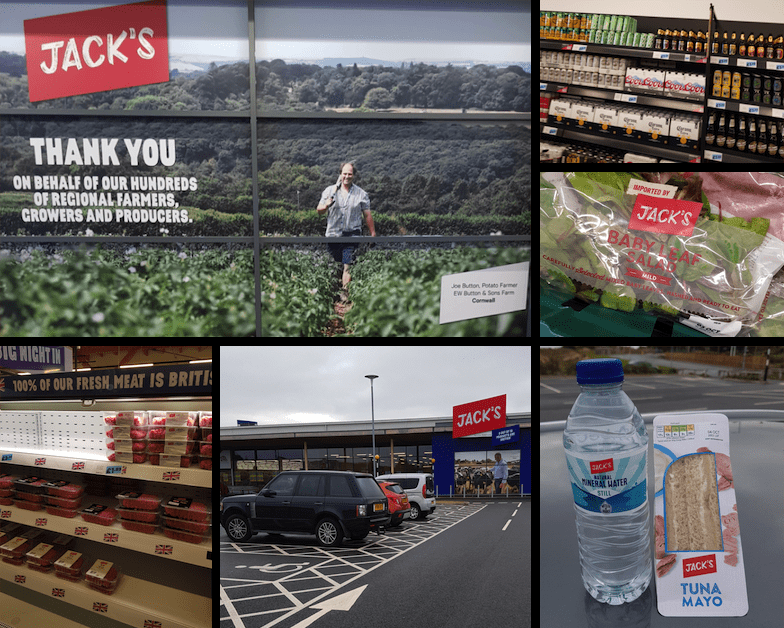 Perhaps the answer lies in Tesco’s 172 Metro stores. Those unloved, un-invested in, urban orphans of the greater Tesco empire. Tesco itself admits they are too big, stock too wide a range, and are expensive to operate and staff. Until now they have had no solution. Aldi and Lidl are pretty fastidious about their property model. Only building standardised, efficient low-cost sheds on relatively cheap brownfield sites. Typically, outside of expensive city centres (although Aldi is talking of moving into Central London amongst others).
So, what about a central urban food discounter? With a limited range, efficient and cheap to run, it’s only real competitors being very small, range restricted and relatively high priced convenience stores and the woeful offer of the pound stores. It could be a very clever, winning masterstroke by Mr Lewis and the Tesco team. Based on their track record over the past couple of years where they haven’t put a foot wrong, we won’t be betting that tenner of our own money against them!

Andrew Grant
Andrew has extensive Commercial Buying and Marketing experience gained at a senior level with a number of the UK’s largest and most respected retailers. He combines this comprehensive category knowledge with highly developed negotiation skills and an in-depth experience of category management and business development planning gained trading with major blue chip FMCG suppliers.

Cheri Jones
29 Sep at 9:52 am
How to Write an Impactful Job Proposal Whether you’re a freelancer fishing for clients or a business trying to land…
Read Article
Leadership Skills Tips