Which One of the Big Four UK Supermarkets will Win the Online Presence Race?

Almost, needless to say, the bigger the online presence, the bigger the sales. Think amazon.com, Vs goodreads.com. Granted, a bigger online presence does not always equal bigger sales. Especially for supermarkets because of their physical presence. But also consider that if a supermarket continually ‘catches our eye’ when we are online, might we try them instead next month when we order our shopping? Before we begin, let’s just remind ourselves of the market share position of each of the big four UK supermarkets;

There are 64.1 million people in the UK and there are 24.6 million households in the UK and collectively the big four supermarkets control 74% of the UK Grocery Market. Let’s see how they perform online:

In comparison ao.com, the online electrical appliance store has 1.6m Facebook likes. It was started in 2000 from a £1 bet and has sales of £173m, which is very small compared to the billions of sales from the supermarkets. To put this in perspective the top store at Tesco can achieve the sales of ao.com in 1 year.

Most of the Facebook posts by supermarkets are of products, competitions, or offers, yet each supermarket still has a different style when it comes to posting. Asda posts about charities are a little more than the others. Tesco posts about their awards that they have won a bit more. Sainsbury’s posts about recipes and they ask questions like, ‘Who carves the turkey in your house?’, which attempts to be personal and engage with their audience.

Supermarket Acting as a Human Online

Though the only supermarket that really communicates and leads us to believe that there is a human being behind the posts is Morrisons. Some of their posts are one-liners with no pictures that introduce themselves, e.g. ‘Good morning, good morning to you  – Lotty’, or ‘Let’s get this show on the road. We’re ready, are you? – Shabana’. This personal touch might not be achieving the likes that Morrisons need yet. Though we believe that this approach will earn them a lot of brownie points on Facebook engagement statistics. Interestingly, on Facebook, the category chosen by Morrisons and Tesco is ‘Retail and Consumer Merchandise’, whereas Sainsbury’s chose the category of ‘Shopping & Retail’, and Asda chose ‘Company’. Does this demonstrate a lack of attention to detail by Asda? 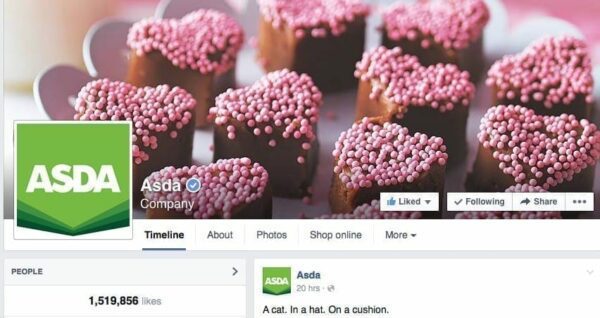 Asda online – which supermarket will win the online race

The statistics speak for themselves as Sainsbury’s takes a clear lead with the number of video’s, the number of views and the number of subscribers, beating all the other big four supermarkets added together. Digging beneath the surface we can see that one of the reasons for Sainsbury’s success is the fantastic 2014 Christmas advert about World War One, which achieved over 13.7m views alone.

Sainsbury’s takes the lead again, in the Google + heat of Supermarket Online Presence

Whilst Google + has never received the attention that Facebook, Twitter and Linkedin have enjoyed, you have to respect this piece of social media because it must be only time before the geniuses at Google fix their social media platform and maybe, just maybe, eclipse the others. Using the power of Google and Youtube behind Google +, success must be on the horizon!

Sainsbury’s is clearly winning the Google + heat, though not far behind are Tesco, and then Asda, with Morrisons showing a very poor fourth position. This piece of the social media puzzle is definitely the one to invest time in upfront, hoping to reap the benefits when Google finally deliver a Google + that is not just for the IT wizards.

Whilst Asda have tweeted 1% of Tesco’s tweets, they have achieved more followers, suggesting that whilst Tesco believe in quantity, quality is the name of the game. Rather than possibly having automated scheduled tweets, Asda might be opting for a more personal and engaging approach. Though the winners are again Sainsbury’s, who may have achieved quantity and quality with the most followers from only 24% of Tesco’s number of tweets.

The tweets from all the supermarkets are about recipes, products and promotions, which is no surprise. Both Sainsbury’s and  Morrisons manage to convince us that a human being is behind the tweets by adding their names as they logon in the morning and log off in the evening, which works well to put a name to the brand. Whilst Tesco and Asda do not do this, Tesco makes up for a lack of being personal with humour. Its ability to laugh at itself and let others laugh too comes through very well, particularly with the ‘selfie’ above posted by the checkout scanner. 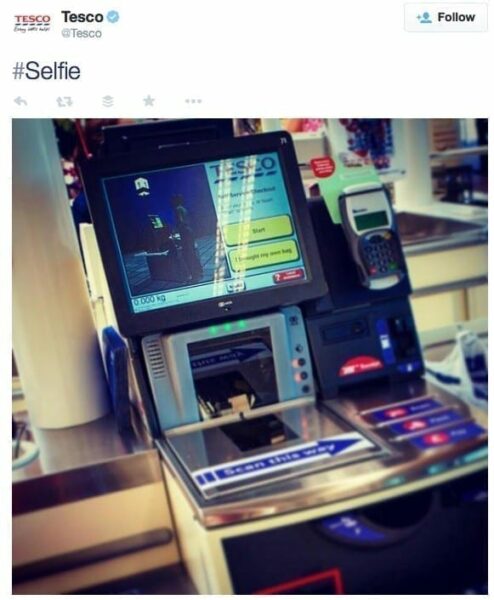 Self-service check out by Tesco

Tesco may have saved itself for the final heat – Alexa

Some may class Alexa as too biased towards the States and others regard it as the bible of who has the best presence on the web. Either way, Alexa measures everyone in the same way, so a comparison of the big four UK supermarkets, using Alexa is a useful measuring stick. Alexa is a little like Kantar in that it takes a large sample of people and then aggregates the data to be representative of the population. In simple terms, Alex takes all the 1 billion websites on the web and lines them up according to their traffic, e.g. Google.com is number 1, Facebook.com is number 2, and Youtube.com is number 3, etc., etc.

Tesco clearly wins the final heat with more traffic than any of the other big four UK supermarkets, but this is to be expected with nearly a third of the UK grocery market through its online and store doors. The surprise, or not, is Asda, who are punching higher than their weight, compared to Morrisons & Sainsbury’s, though this is probably the influence of walmart.com.

The really poor performance comes from Morrisons with such a poor ranking, and particularly when this is compared to ao.com who have an Alexa ranking in the UK of 453 and 17,667 in the world. The £173m ao.com lightweight is certainly holding his ground versus the £18bn Morrison’s heavyweight. 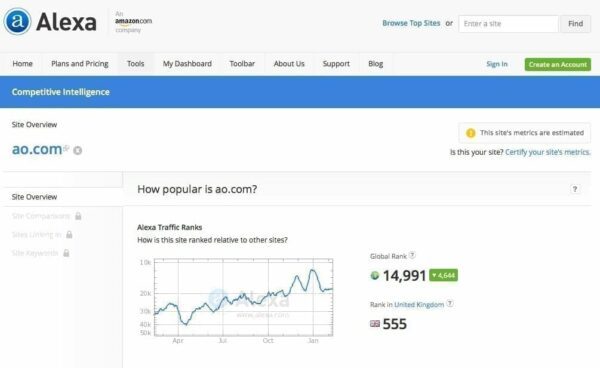 How Popular is Ao.com?

And to answer the question of ‘Which one of the big four UK supermarkets will win the online presence race?’.

Asda is being helped by its American parent and holding its own very well with a credible online presence. Morrisons has a very poor online presence, though showing some sparks of a human being behind the social accounts. Sainsbury’s has a great online presence supported by an incredible Christmas 2014 Tv advert. Tesco seems to be trying hard and succeeds in many places, especially as measured by Alexa.

As a collective, the big four UK supermarket online presence is very poor being beaten, on many fronts by smaller brands that seem to understand and use social media better. Our Category Management Academy training course features a session on understanding the supermarkets from an online point of view and is suitable for Category Managers and Account Managers that want to understand their retailer, category & shopper better, and want to be able to identify opportunities in the category that can be turned into sales and profit.

In your opinion, which supermarket is the best online? Please share your view by commenting at the end of this article.
Building on the article above, here are a few independent thoughts:

Get in Touch With Us:

Darren A. Smith
Yesterday at 10:03 am
Discover 10 Tips for Small Business Owners In my 18 years as an SME owner, I have often learned the…
Read Article
Communication Skills Tips