Book: A Complete Understanding of the Groceries Supply Code of Practice (GSCOP): 76% of Direct Suppliers Don’t Understand the Code. Do you?

£9.95
If you work in the world of supermarkets, suppliers, groceries, or FMCG, in the UK, you’ll be aware of something called ‘GSCOP’ or heard of ‘GSCOP’ rules, or ‘GSCOP regulations’.…
£9.95

If you work in the world of supermarkets, suppliers, groceries, or FMCG, in the UK, you’ll be aware of something called ‘GSCOP’ or heard of ‘GSCOP’ rules, or ‘GSCOP regulations’. This stands for ‘Groceries Supply Code of Practice’.

The GSCOP Code of Practice was implemented by the UK Government to encourage major UK supermarkets to treat suppliers fairly. Like guidance or set of rules. To help you understand the Code better, we have created the GSCOP Book. Sales Directors, Category Managers, and National Account Managers need to understand the ‘rules of the game’ that they play in, because how can they call ‘foul play’ if they don’t know the rules? It’s ok not to know the off-side rule, unless you are a footballer!

This book has been written to help suppliers to major UK supermarkets to understand the Government legislation that was brought-in to protect them. Christine Tacon, the Groceries Code Adjudicator, challenges suppliers to understand the Code, in this 3.5 minute video https://www.youtube.com/watch?v=4oEgPaQtcUw This book is designed to raise awareness of the Code with suppliers, highlight the most important areas for a supplier to consider, and be used as a reference to come back to understand, for example, the rules around ‘delisting’ when they need to.

‘Did You Know?’ Facts 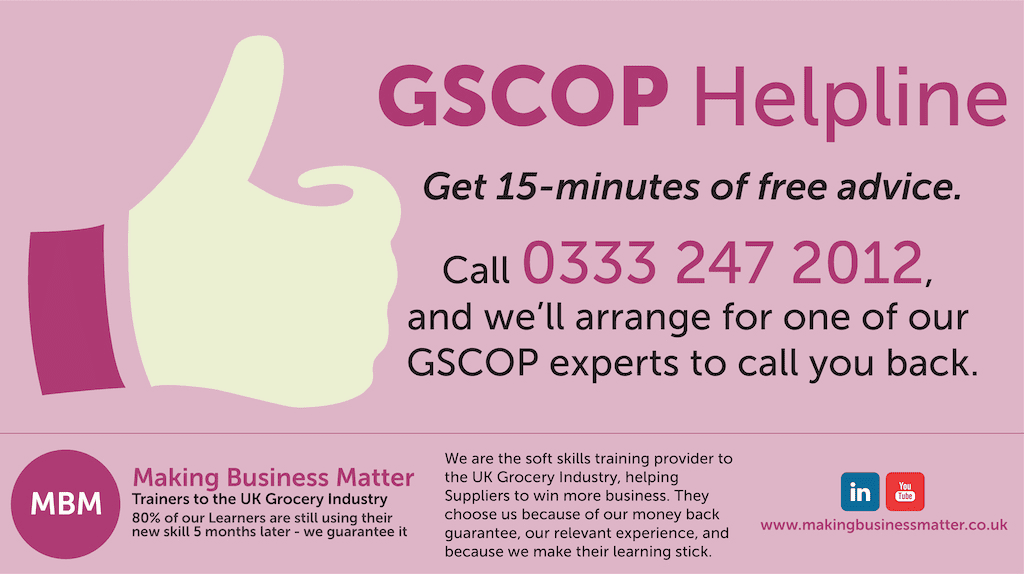 Testimonials to Read the Book

“Whilst I already have a good understanding of the Groceries Supply Code of Practice, the GSCOP book re-affirmed what I knew, but more importantly brought to the forefront of my mind some of the peripheral parts of the code I’d overlooked. It is easy to understand and breaks the topic down into manageable work areas. Moreover, the book provided some of the more junior members of the team, who were less conversant with this subject, a good introduction on how the code can help them in practice.”, by Chris White, Account Director at Karro Food Group.

“A comprehensive treatment of the issue and a must-read book for account managers handling the major supermarket multiples. Written by someone who has actually worked in the industry, Darren’s book gives some practical insights for suppliers on the Code and how it needs to form part of the decision-making process when dealing with the supermarkets.”, by Mark Craft, Editor at EMR-NAMNEWS.

“I believe it is essential that every commercial manager has an awareness and understanding of the Groceries Supply Code of Practice. This is the playing field by which our retail customers now operate, you need to understand the rules to be able to compete and grow. Ignorance is no excuse, the market has moved on.”, by Alan Chapman, Acting Managing Director, Walkers Sausage Co.

Be the Best Version of Yourself with these Desk Tents